On February 2017 Guerrilla Games released ‘Horizon Zero Dawn’, a new IP featuring a large open world. Before that, the studio was known for the Killzone franchise, which consisted of a series of linear shooter games. When the studio started working on Horizon Zero Dawn, Guerrilla Games’ “Decima” game-engine was highly optimized to for linear shooter experiences, but did not yet support the tools and systems required to create a large open world game. Learn how the studio developed systemic and procedural solutions to overcome these technical and artistic challenges. In addition, hear what challenges a studio like Guerrilla Games is currently facing that are likely to have solutions in Computational Intelligence.

ARJEN BEIJ // Lead AI Programmer, HORIZON ZERO DAWN
As Lead AI Programmer, Arjen Beij leads the AI team at Guerrilla. Arjen realized at an early age that making games would be the best job in the world, so he decided to study Computer Science at the Amsterdam University of Applied Sciences. Upon receiving his B.Sc. degree in in 1999 Arjen joined Lost Boys Interactive, where he got the opportunity to develop his first commercially released games. Two years later Arjen joined Guerrilla, where he worked from 2001 to 2011 as a Senior AI programmer on the original Killzone trilogy, and from 2011 onwards as the Lead AI Programmer on Killzone shadown fall  and Horizon zero dawn. 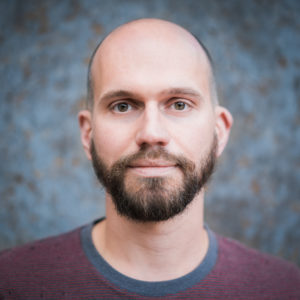